Here at Moxee Marketing, I work as a Digital Marketing Consultant primarily with European travel and lifestyle brands to increase awareness, website traffic, and ultimately high-quality leads and sales. I am also a Content Creator with my travel blog Caribbean & Co. which aims to showcase the best of the Caribbean region.  And two years ago, at the height of the COVID-19 pandemic, I became an unintended co-Founder and Board Member of the Black Travel Alliance, a non-profit organization advocating for increased diversity and inclusion in the travel industry.

The Black Travel Alliance now with [501(c)(3)] status was launched by a group of Black travel content creators from across the globe in the span of two weeks.  Covering a range of travel niches, the eighteen of us created the organization in direct response to the tragic death of George Floyd on May 25th, 2020, and the subsequent posting of blank black squares by corporate brands, including those in the travel industry.

We did so after recognizing that there was a massive disconnect between the overwhelming show of support for the Black Lives Matter movement by destination management organizations (DMOs) and travel brands versus the current lack of diversity and inclusion in the travel industry.  We realized that we could no longer remain on the sidelines discussing the challenges amongst ourselves. We had to become part of the solution and instead of just responding via our individual social media channels, join forces for greater impact.

Thus, after an initial Zoom meeting on Friday, June 6th, 2020, the Black Travel Alliance was launched on Tuesday, June 16th, 2020, with a press release written by myself and fellow co-founder Davida Wulff-Vanderpuije. The press release didn’t just announce the arrival of the new organization but instead put front and center a campaign that the eighteen co-founders agreed to name  #PullUpForTravel, inspired by the activity under the hashtag #PullUpOrShutUp, started by Sharon Chuter also in response to #BlackOutTuesday. 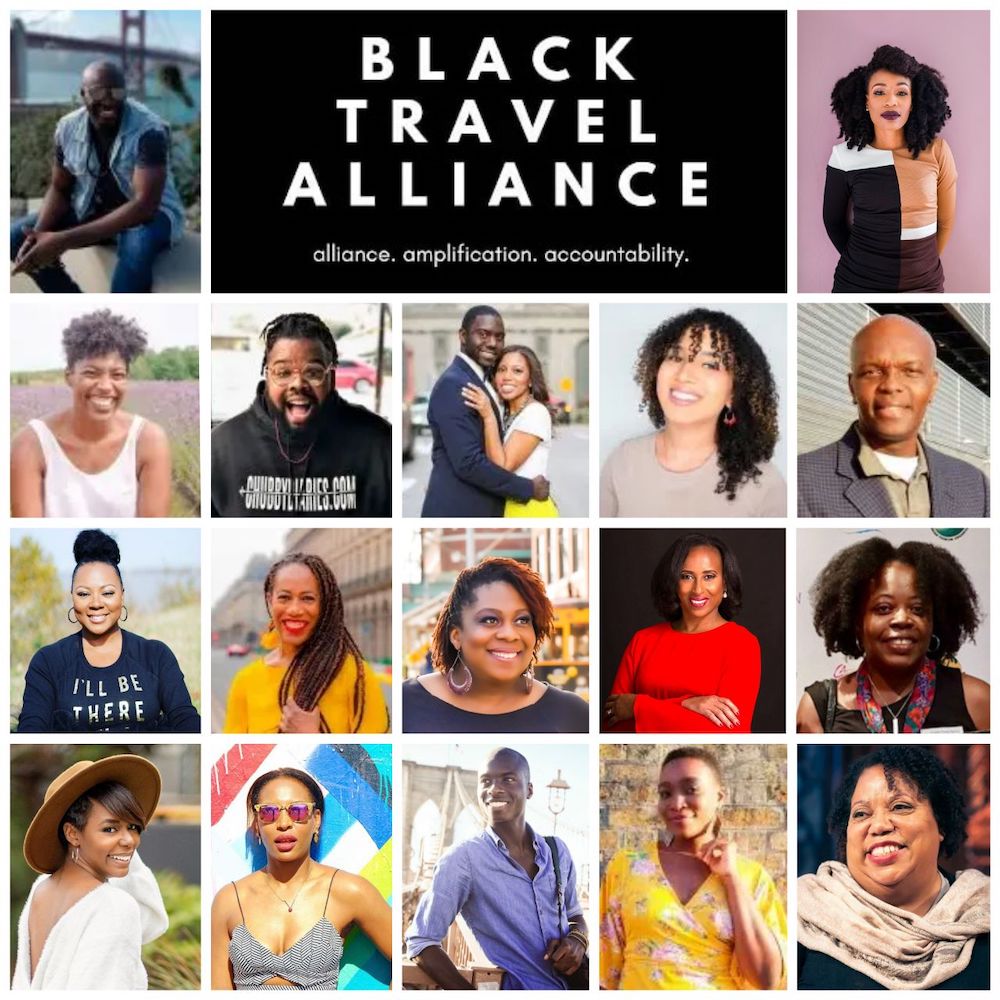 The long-term goal of the #PullUpForTravel hashtag and campaign by the Black Travel Alliance is to get DMOs and travel brands to take #BlackLivesMatter and #BlackOutTuesday support beyond social media and to work towards the meaningful representation of Black voices in the travel industry. This requires an acknowledgment of systematic racism (intentional and unintentional) in the travel industry and to become more inclusive in all areas of their business including hiring practices and marketing campaigns.

Thus, as a starting point, we asked DMOs and travel brands to publicly share their 2019 KPIs on Black representation in their companies and activities in five major areas: employment, conferences & tradeshows, paid advertising/marketing campaigns, press, and philanthropy.

Specifically, we asked for data on these five KPIs:

This insight was important so that we could begin to benchmark and gather data for a Black travel scorecard.  Urgency for responding to the #PullUpForTravel campaign was created by asking DMOs and travel brands to share their KPI information publicly on their preferred social media channel by Friday, June 19th, 2020.

The deadline was short (some thought arrogantly so!), but the date was symbolic as June 19th is Juneteenth also known as “Juneteenth Independence Day,” “Freedom Day” or “Emancipation Day.” Made into a federal holiday last year by President Joe Biden, Juneteenth commemorates the emancipation of enslaved people in the United States. The holiday was first celebrated in Texas, where on June 19th, 1865, in the aftermath of the Civil War, enslaved Black Americans were declared free under the terms of the 1862 Emancipation Proclamation. 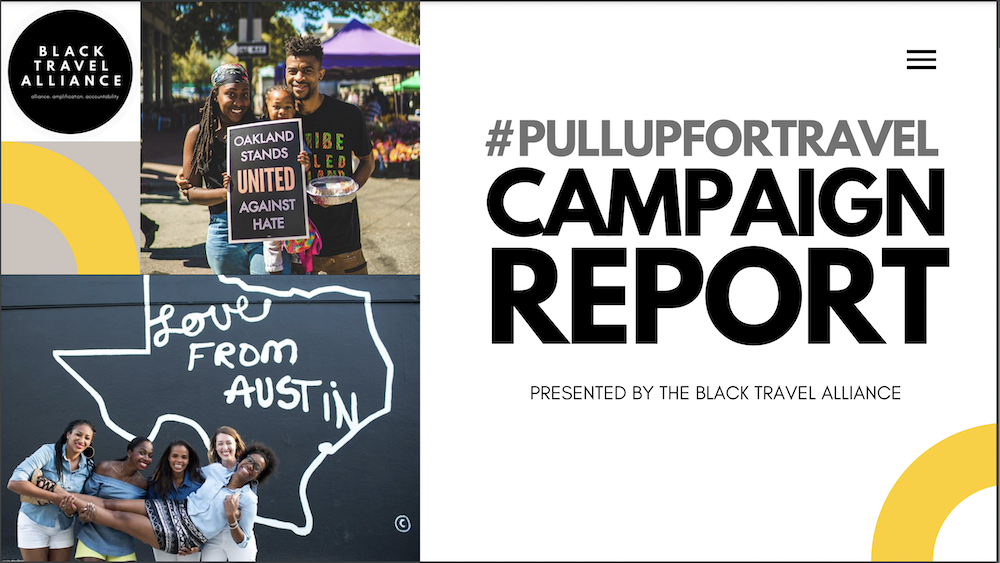 Responses to the #PullUpForTravel Campaign

Responses to the #PullUpForTravel campaign before and after the deadline came via email, press statements, and blog posts, but most were via social media. In particular, on Instagram, the starting point for the blackout squares. And after spending hours organizing the responses for analysis with assistance from others of the Black Travel Alliance Research Committee which I chaired, we ascertained that of the 121 travel organizations we identified as posting about #BlackLivesMatter or #BlackOutTuesday, 67 (55%) responded to the #PullUpForTravel campaign.

As a new non-profit organization, we were grateful for the responses but somewhat disappointed as most were statements or provided incomplete data. Below is a summary of the responses for the five KPIs:

The responses to this initial #PullUpForTravel campaign as detailed in the long-form report support our current view that: 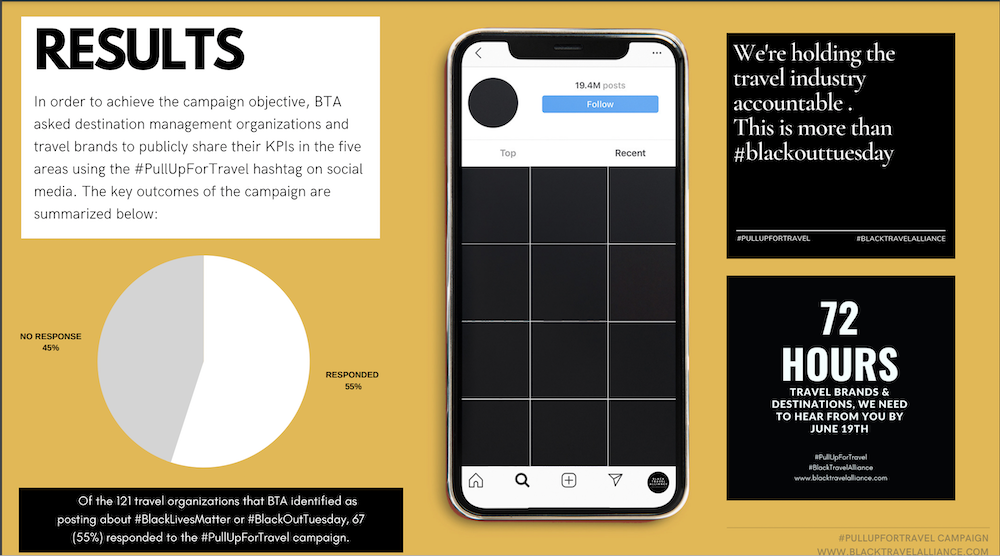 In January 2021, we successfully launched The Black Traveler: Insights, Opportunities & Priorities study and report done in partnership with the MMGY Global along with the National Coalition of Black Meeting Professionals and National Association of Black Hotel Owners, Operators, and Developers.  Shortly thereafter,  the Black Travel Alliance Research Committee launched #PullUpForTravel2021. Because as stated in the initial press release, “more than a mere black square on social media, the Black Travel Alliance believes this data will demonstrate true allyship, and that these areas are key towards ending the systemic lack of diversity in the travel industry.”

Thus, I led the team in the creation of a robust 30-minute survey in partnership with MMGY Global to capture data for the initial five KPIs, along with a sixth KPI, Vendors & Procurement – as increased participation and involvement of Black travel and tourism businesses is a key component to increasing diversity and inclusion in the travel industry.

The #PullUpForTravel2021 survey was sent to over 1,000 destination management organizations and travel brands by MMGY Global. Through a three email sequence, we advised that the KPI information would be presented in summary format to provide a snapshot of diversity and inclusion in the travel industry. Beyond the KPIs, the case studies shared would be used to help spotlight the opportunity and potential ROI when destination management organizations and travel brands are inclusive and catering to the needs of Black travelers.

Sadly but perhaps not surprisingly, few organizations completed the survey. Perhaps because depending on their organizational structure, collecting the data required involvement by multiple departments, including but not limited to Human Resources, Marketing, Public Relations & Communications, Finance, and Procurement. Perhaps, also because many knew that their KPI data would not paint their organization in a positive light.

Whatever the case, it confirmed our view that despite the incremental progress being made, we are still a long way from achieving diversity and inclusion in the travel industry. Thus, there is a continued need for advocacy organizations like the Black Travel Alliance, whose three pillars are: alliance, amplification, and accountability — striving to create a world where Black people are supported and accurately represented in the travel industry.

The Black Travel Alliance is focused on building a global community of Black travel authors, bloggers, broadcasters, content creators, journalists, photographers, podcasters, and social media influencers. It also provides training, business support, and opportunities to its members through Wavelength, a speed networking event that connects Black travel content creators with executives from destination management organizations and travel brands. Finally, it is striving to hold destinations and travel brands accountable on the issue of diversity in travel marketing and storytelling through research projects like The Black Traveler study and History of Black Travel both of which I actively worked on!

Note: Click here to read the individual responses to the initial #PullUpForTravel campaign along with the long-form report written by myself and Davida Wulff-Vanderpuije. You can also check out the graphic summary created by Martinique Lewis. 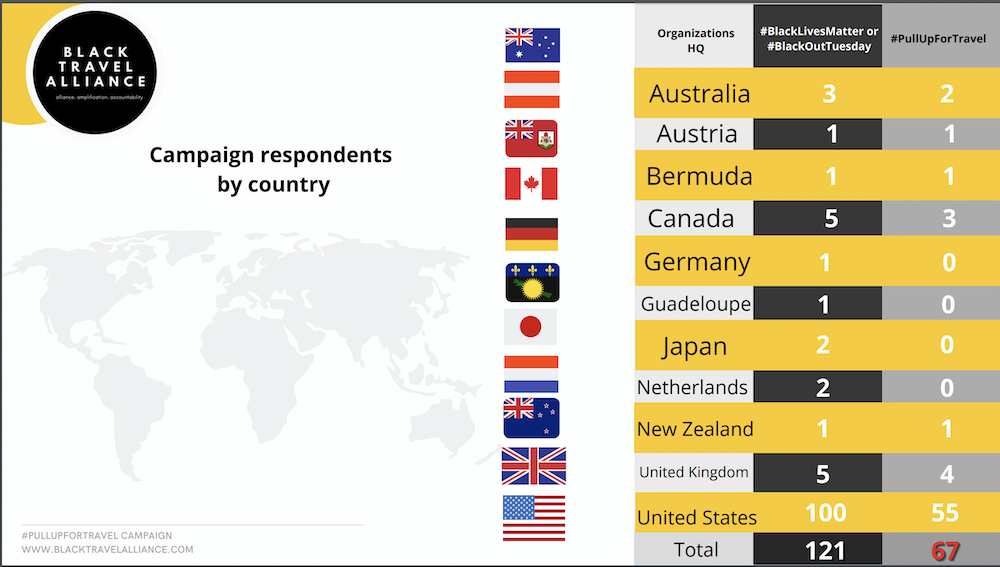 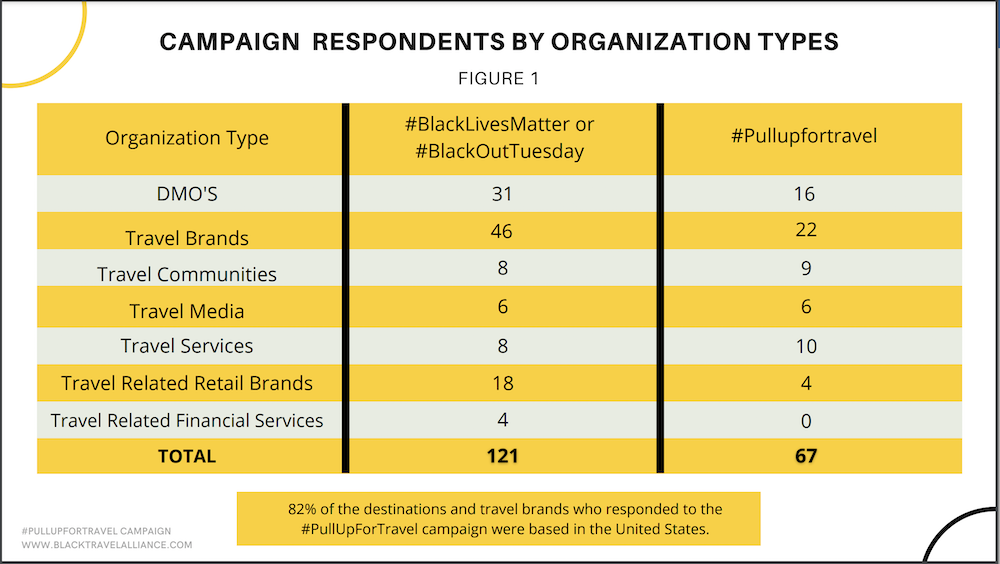